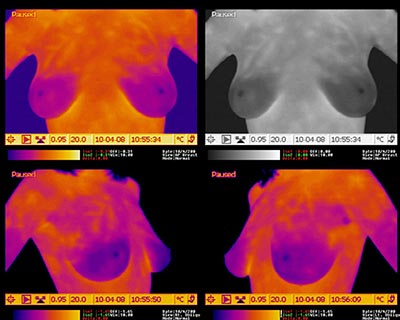 Because breast cancer cells are rapidly dividing, they require an increase in blood flow—a process known as angiogenesis, meaning new blood vessel growth. Angiogenesis is the earliest known sign of breast cancer and is able to be identified with breast thermography.

Breast thermography is an FDA approved breast cancer screening test. There are over 800 published studies in peer-reviewed journals that have attested to the accuracy of breast thermography. Most of this research has shown the accuracy to be greater than 90%. A 2008 study at New York-Presbyterian Hospital in Cornell was published in the American Journal of Surgery, demonstrating a 97% sensitivity. Unlike mammography, thermography is safe, does not use radiation and is NOT made less accurate by dense breast tissue as is the case in mammography. It is also safe to use on women who have breast implants. Radiation is known to cause cancer and women who are exposed to repeated mammograms are more likely to develop cancer. Thermography does NOT increase the risk of developing breast cancer.

Mammography is effective in detecting benign tumors and less effective for detecting more aggressive breast tumors. Thermography is more effective in picking up aggressive cancers, because of the angiogenesis. According to the New England Journal of Medicine, 1.3 million women in the US have received unnecessary and invasive cancer treatments, including surgery, radiation, hormone blocking therapy and chemotherapy for the last 30 years due to mammograms detecting harmless tumors. Other studies conducted in Europe have concluded that mammograms reduce the risk of death from cancer by less than 10 percent and may not reduce it at all. Thermography can reduce the number of false positives and over treatment of breast cancer by demonstrating whether a tumor is metabolically active. Because thermography does not use radiation, screening can begin much earlier. It is recommended to perform a baseline at age 20, screening every other year until age 30 when screening should then be conducted annually. Early detection is the most important factor in treating and overcoming breast cancer. Themography detects heat patterns that may identify suspicious pathology earlier than any other breast cancer screening tests. Thermography is safe, painless, effective and inexpensive.